In 2015, The Confederate Flag became an unindicted co-conspirator in the Charleston, South Carolina church massacre. Since then, there has been an outbreak of violent, racist behavior among other, like-minded historic icons, particularly statues and monuments. As was the case with the Confederate Flag, these spiteful statues and malevolent monuments must be hunted down and removed from our public squares to protect the general population.

This web page is dedicated to reporting on the misdeeds of these marble menaces so that you, the public can stay safe and informed. No longer will these bronze bullies terrorize our city streets unheeded. We will see to it that their monumental misdeeds are exposed to the light of public scrutiny to ensure their malevolent masonry meets the swift hand of social justice. The dedicated citizen journalists who investigate these criminal castings are members of an elite squad known as Statue Watch. Here are their stories…..
__________
Robert E. Lee Charlottesville, Virginia
The statue of Robert E. Lee on his horse Traveller has stood in Charlottesville, Virginia since 1924. It stood there peacefully for over 90 years. Although there were reports that it did occasionally sneak out of Charlottesville and head up to Gettysburg Pennsylvania where it repeatedly attempted to take Cemetery Ridge, no one was hurt and charges were never pressed.

Then around 2016 the statue apparently began harassing members of Black Lives Matter and it was at this point that the N.A.A.C.P called for it to come down. They had acquired evidence showing that the statue had been working secretly with both George Zimmerman and the Ferguson, Missouri police department. Protesters soon gathered around the statue demanding that it be taken down.

The statue was then implicated in a clandestine relationship with Richard Spencer, an alt-right leader who staged a rally for the statue’s defense on August 12, 2017. It was during this rally that the statue of Robert E. Lee sought out 20-year-old James Alex Fields, Jr. from Ohio, and with help from the statue of Confederate General Thomas “Stonewall” Jackson convinced him to drive a late model gray Dodge Challenger into the crowd killing a 32-year-old woman.

The statue of “Stonewall” Jackson has also been charged in the case.
The trial for these statues will be held January 14-16, 2019 in Charlottesville.
__________
Frank Rizzo, Philadelphia Pennsylvania
Frank Rizzo served as Philadelphia police commissioner from 1968 to 1971 and mayor of Philadelphia from 1972 to 1980. He was known for his tough approach to law-and-order, famously responding to a disturbance at a housing project wearing a tuxedo with a nightstick tucked into his cummerbund. During the turbulent 1960’s and 1970’s he drew the ire of many for his treatment of radical groups like the Black Panthers. He was called a racist and hated by many, and celebrated as a hero by others because he kept the city safe. He was a major part of Philadelphia history.

Frank Rizzo died in 1991, and his statue was erected in 1999 in Philadelphia’s Thomas Paine Plaza in front of the Municipal Services Building where it stood peacefully until the inauguration of Mayor James Kenney in January of 2016. This started a chain of events that would lead Frank Rizzo's statue to conduct a reign of terror marked by brutality and discrimination against people of color and the LGBTQ community. 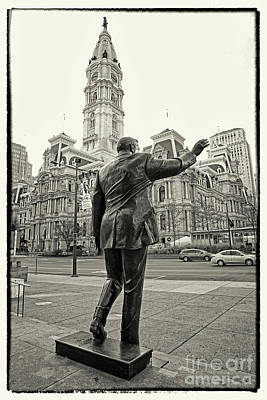 Already upset by the Kenney administration’s lax approach to law enforcement, Frank Rizzo’s statue became incensed when the new mayor celebrated Philadelphia as a sanctuary city. Apparently the sight of Kenny doing a victory dance in the Mayor’s office was more than it could bear and on a cool spring evening in 2018 the 2,000-pound, 10-foot bronze statue grabbed its legendary night stick and went to work ‘busting heads’. It was first seen throwing homeless people out of the Reading Terminal Market. It then quickly headed down Market Street to 30th Street Station where it began rounding up illegals and turning them over to ICE for processing. After that the malicious monument was spotted giving pat-downs to Eagles fans as they entered Lincoln Financial Field, and was later seen trying on costumes at the Mummers Museum which was extremely triggering to the LGBTQ community. The statue was also alleged to have stolen several packs of Tastykakes from street vendors on its way home to Paine Plaza where it assumed its position as though nothing had happened.

Charges filed against the Frank Rizzo statue were dropped after it became clear that eye witness accounts were vague and confused. In all of the commotion many were unsure if they were seeing the statue of Frank Rizzo or the statue of Rodin’s “The Thinker “ which normally sits silently perched along the Benjamin Franklin Parkway.

Mayor Kenney has announced that the statue will be moved in 2020; To where is anyone’s guess as the city is still "narrowing down its options." Our guess is that it will be in a drainage culvert somewhere underneath the Schuylkill Expressway.